It’s bluebell time! I don’t know anybody who doesn’t love them. I think a few years ago they were voted ‘Britain’s favourite flower’ – and although I usually  take these titles with a pinch of salt, in this case it just may be that the general public have got it right. 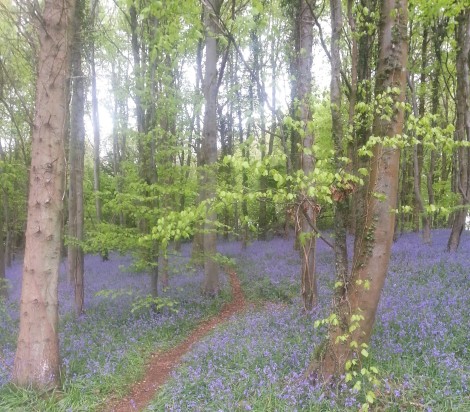 Bluebells are stunning when you see them en masse like this and no photographs do them justice, but they’re not just a pretty face – or scent. In the middle ages the bulbs would be dried and powdered before being applied to open wounds to stem bleeding, as well as being made into a drink which would ‘produce and discharge urine’ – a bit like dandelions then, called piss-a-bed for the same reason. Our medieval ancestors also used the sap to stick flight feathers to arrows and the root was made into a type of glue that was used in bookbinding, but beware – it’s poisonous if it’s fresh. So do not go frolicking in the woods and chewing at some bluebell root!

The other flower we are seeing everywhere at the moment is the primrose, which has  – or had – even more uses than bluebells.

Some of the various effects of the primrose allegedly were remedies for: bronchitis, insomnia, nervous tension, rheumatism and gout. It was made into a sleeping draught (which tallies with the insomnia/nervous tension) and used to purify the blood (eg. the treatment for rheumatism and gout). Older leaves were boiled as vegetables, flowers and young leaves added to salads and jams or wine made from the flowers. Though there is also a folk tradition that children who’d eaten the flowers were able to see fairies. Ha!

I’m not surprised at any of this. Modern drugs have come a long way but the roots (sorry) clearly lie in the ancient practice of concocting oral medicines (draughts or cordials), poultices and ointments from the garden or woodland. Not only plant matter though – other natural treatments included packing wounds with honey to reduce the chance of infection and even cobwebs to help with blood clotting. And much of this goes back a lot further than medieval times, of course. Alex is now in the last spring term of her degree in Ancient History and has been writing her dissertation – and making our minds boggle at the same time. The subject matter is …shall we say, family planning in ancient Greece and Rome…we now know more about the use of crocodile dung and the effects of juniper berries than we will ever be comfortable with.

Time to move on, I think. This weekend we took a trip to Ilfracombe in Devon, for the wedding of Lizzie’s friends Sarah and Ed. The wedding was at 4pm on Saturday so we set off at about 10 that morning, having made sandwiches for the trip (I’m always hungry when I’m travelling) and stashed our wedding finery safely in the back of the car.

The road east takes us past the impressive Raglan Castle, the last castle built in Wales

Before long we’d reached the natural barrier between Wales and England that is the Severn River Crossing: 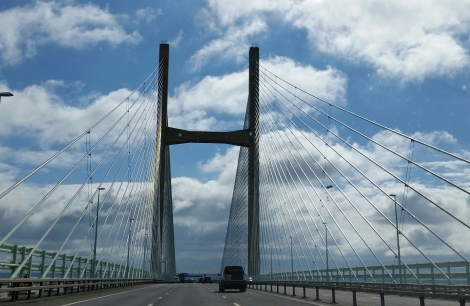 Thankfully it was an uneventful journey, and took less than three hours. Alex sat in the front because historically she suffered from travel sickness…so I sprawled in the back and contented myself with taking photos through the windows. The M5 crosses the Somerset Levels, where Alfred of Wessex hid from the Danes (and may or may not have burned some cakes) and away to the east, across the flat, low land, I could see Glastonbury Tor quite clearly. Sadly it was too far to get a decent picture of it but maybe we’ll make a special trip across here some time. Next came Devon and Exmoor National Park. We were treated to good weather and stunning views but back-seat-of-the-car-photography can only do so much.

We’d never been to Ilfracombe before and so had no idea of the size or geography of the place. I’d relied on Booking.com to find a decent hotel for the night and, to be fair, it came up trumps. Wildercombe House was everything it claimed to be – clean, comfortable and welcoming – and also had the best shower I’ve come across in any hotel, anywhere. The landlady cheerfully got our rooms ready four hours earlier than usual so that we could check in and get changed in plenty of time for the event. And there was an amazing view, as it was up on a hill overlooking the town. (When we got to the wedding later (by taxi) everyone we spoke to said that they were staying ‘up on a hill’. I don’t think any of us were staying on the same hill, but I can’t honestly be sure!)

The hill we were staying on gave us a view of home – the Welsh coast in the distance, about 25 miles across the Bristol Channel

Lizzie (who was a bridesmaid) and Katie had arrived the previous day, along with Sarah, Ed and a bunch of others. Lots of these long-time friends now have young children and they’d come with their own parents in tow for the weekend so that a little grandparental babysitting could be done in the evening, but all of the children and babies were at the wedding ceremony and meal – which was a barbecue, essential to a beach wedding. And it was great! I know some people prefer not to have little ones at their weddings because they feel they’re disruptive etc, and that’s entirely up to them. Personally I think that it’s wonderful to include all age groups and all members of families and yesterday was even more special because of their presence. And look how lucky we were with the weather (though it was a little windy and not as warm as it looks!) 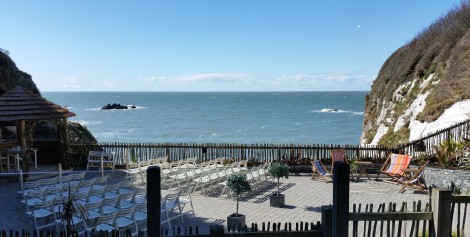 Lizzie escorting a very excited flower girl to the wedding

Sarah looked gorgeous, as did all of the bridesmaids, the flower girl, little Ollie (walking to the front of the aisle with bucket and spade in hand) and Ed, as laid back as always even on an occasion that can bring most people out in a small fit of nerves. And it’ll be a long time before I forget the expression on Sarah’s dad’s face – he literally looked as though he was going to burst with pride.

Sarah and Ed cutting their wedding cake, decorated by Hannah

The sun setting on a lovely afternoon

The next morning we explored Ilfracombe for an hour or so in yet more gorgeous spring sunshine.

From the terrace of the hotel 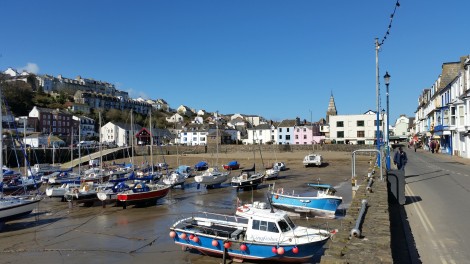 One of the town’s claims to fame is a statue by Damien Hirst (an Ilfracombe resident), called Verity. As you may have guessed, it’s controversial – it’s by Damien Hirst, after all. It’s a pregnant, naked woman, standing on a pile of law books and holding the scales of justice in one hand and a sword in the other. Already enough to shake the genteel Victorian town, it’s striking as you approach it from the harbour – but when you walk around to the front and right side it’s even more provocative because it displays the internal anatomy of the woman and foetus.

It’s certainly interesting, if a little disturbing, and makes a change from the boring and predictable statues sometimes found in seaside resorts, nestling amongst the  begonias. We left Verity and Ilfracombe behind and retraced our wheel tracks back up the M5, before coming to a complete halt at the Severn Bridge. There’s often a very slight delay here, but I don’t remember ever coming to a standstill before. People got out of their cars and off their buses to wander the carriageway, trying to work out what was happening, but within fifteen minutes they were scurrying back and we were inching forward to the toll barriers. Once through we got an idea of what had caused the delay – a horse box travelling in the other direction had been involved in some sort of mishap. We soon realised how lucky we were that we were travelling west and not east – they were stuck for over 10 miles. 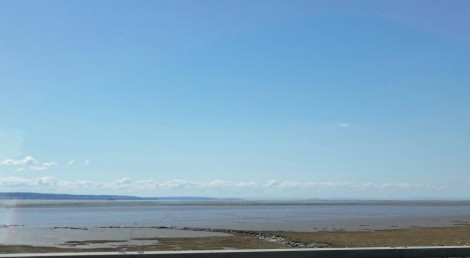 No matter how much we’ve enjoyed being away, this is a sight to gladden the heart! Back in Wales, looking seawards as we cross the Severn estuary

So we were back home after a thoroughly enjoyable day and night away, spent in the company of a delightful group of people. Thank you, Sarah and Ed, congratulations and lots of love to you both. And one last message to you – or anyone else embarking on married life –

All you need is love. But a little chocolate now and then doesn’t hurt