We’ve been deep in Jacobite territory this week. Until a few days ago I have to admit I didn’t really know what Jacobites were, but I’ve been on an interesting learning curve. (Due to the order we travelled, I learned the end of the story before the beginning – but I’ll tell it the right way around.)

The only things I knew (or thought I knew) about ‘Bonnie Prince Charlie’ were that he had been denied the throne that was rightly his, that he was hidden in a boat by a girl named Flora Macdonald, and that the ‘Skye Boat Song’ was written about the event. Some of my new information has come from the interwebcybernetthingy but some of it from various sites we’ve visited, all of which display facts and copies of original letters and other documents.

First, the background: when Elizabeth I died childless the English crown went to her cousin James, son of Mary, Queen of Scots.He was already James VI of Scotland, of the House of Stuart, but became James I of England in 1603 (to keep things simple I’m going to forget the Scottish numbers and just use the English). For just three generations the crown passed from father to son (with a pause for an execution) but when Charles II died without a legitimate heir (even though he had hordes of illegitimate bundles of joy), his brother James became king.

This is where the problems start, because James II had converted to Roman Catholicism. In 1688, after reigning for just three years he jumped ship to France – or rather, he was pushed, because the British establishment and public couldn’t handle the idea of returning to a Catholic monarch. For the same reason his son James Francis Stuart was unacceptable, but his daughters Mary and Anne had been brought up as protestants. Who knows why? Anyway Mary succeeded and her husband, William of Orange was crowned with her. They had no children so Anne became queen. She also died childless despite multiple pregnancies. Parliament had passed the Act of Settlement in 1701, denying the accession to anyone not of the protestant faith and so the next person in line was George of the House of Hanover (his mother Sophie died a little while before Anne).

James II died in 1701 but the ambition to claim the crown was continued by his son James Francis and grandson Charles Edward Stuart.

Religious faith aside, you can sort of see that they had a fair point. James Francis became known as the Old Pretender and Charles as the Young Pretender. Their supporters were called Jacobites (after the Latin form of James, Jacobus) and most of this support came from Scotland, and in particular from the Highlands.

Now that’s out of the way we can get back to the story. In 1689 Highlanders loyal to James rebelled and defeated government troops at the somewhat comically named Battle of Killiekrankie. The following year William of Orange met James II and his army at the Battle of the Boyne, which William won decisively. James returned to France, his ambitions in ruins, but William now became concerned about the level of support for James. Along with his government he decided to tackle the problem at source – in the Highlands. The starting point was to demand that the chief of each clan make an oath of allegiance to him before the end of the year.  This brings us to one of the most infamous events in Scottish history – the Glencoe Massacre. A few days ago we went to the Visitor Centre at Glencoe to find out more about it. It’s a stunningly beautiful location.

The story of the massacre is told really well and is quite chilling. To cut a long story short: for a number of reasons, including appalling weather and a bit of gamesmanship on the part of all sides, the chief of the clan MacDonald, Alastair MacIain, made his oath six days late. He was assured that the oath was valid, but plans had been laid weeks earlier to punish any clan that stepped out of line. There’s quite shocking evidence of this displayed on the walls. Early in February, 120 British soldiers turned up at MacIain’s home in Glencoe, claiming to be there for a routine tax inspection. The soldiers were billeted in villagers’ homes for almost two weeks. On 12th February orders from John Dalrymple, Secretary of State for Scotland, were received by the Officer in Charge:

‘you are hereby ordered to fall upon the rebells, the macdonalds of glenco, and put all to the sword undder 70. You are to have a speciall care that the old fox and his sones doe upon no account escape your hands, you are to secure all the avenues that no man escape. This you are to putt in execution att fyve of the clock precisely…this is by the king’s speciall command.’

At 5am on the morning of 13th February 1692, the soldiers set about the cold-blooded murder of all the men in the villages, who were unarmed and asleep. Some women and children were also killed whilst others escaped into the hills and died in the freezing conditions.

This plan backfired because it stirred hatred for the authorities and encouraged more support for the Jacobite cause.This led to the first Jacobite Rising, in 1715 (the skirmishes in 1689 apparently don’t count), which had the backing of the French and Spanish but the Jacobites were defeated at the Battle of Glen Shiel and for a time things settled down. 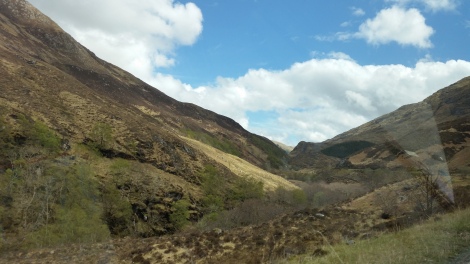 Glen Shiel, the scene of a 1715 battle between Jacobite and government forces

In 1720 a new player arrived on the stage: Charles Edward Louis John Casimir Silvester Severino Maria Stuart. Son of James Francis Edward Stuart, Charles was no doubt raised on stories of his family’s past and the inheritance that his father had been denied. He became determined to reclaim the throne of Scotland and the summer of 1745, accompanied by a handful of retainers, he sailed for Scotland to raise an army. When he landed on the Isle of Eriskay, west of Skye, he was told to go home. Although he’d never set foot in Scotland before, he replied ‘I am come home…my faithful Highlanders will stand by me.’ The news of his arrival reached London a week later on 1st August and a reward of £30,000 was offered for his capture. This equates to the astonishing sum of £15,000,000 in today’s value!

By a complete accident I had booked us into a bed and breakfast just five miles from the point where Charles held his first rally to recruit Highlanders to join his army. The place is called Glenfinnan and I must admit that the reason we’d taken notice of it was because of the viaduct that passes through the valley – it appears in the Harry Potter films!

The Harry Potter viaduct at Glenfinnan

Charles was rowed to Glenfinnan along Loch Shiel, arriving on 19th August. Hundreds of Highland clansmen arrived to join his army.

The royal standard of the House of Stuart was raised, toasts were made and letters read from the Old Pretender proclaiming himself king and Charles prince regent.

Part of a document displayed at Edinburgh Castle; the complete document shows the signatures of over two hundred men of the Duke of Perth’s regiment, confirming their oath of allegiance to James Francis Stuart

Two days later 1,500 men began the march south.At first all went well; the government was defeated at the Battle of Prestonpans and by September Charles had established his court at the Palace of Holyrood in Edinburgh. A decision was made to invade England – rarely a good idea – and by December the Stuart army had reached Derby. This really rattled the government’s cage, to say nothing of the man sitting on the golden chair, George II of the House of Hanover. Sadly for Charles, not as many English Jacobites (there were English Jacobites? Ah, let’s not forget the religious dimension  – or the love for the underdog) joined his throng as he would have liked and he and his advisers unhappily retreated north of the border.

They didn’t go alone. They were chased by George II’s son, the Duke of Cumberland, a really nasty and determined SOB. He caught up with them at Drumdossie Moor on 16th April 1746 and his revenge was savage. You may know the place by another name – Culloden. This was the last battle fought on British soil. It lasted less than an hour and left 1,500 men of Scotland dead or wounded. We visited the site of the Battle of Culloden and it is bleak. There’s a visitor centre that explains the context as well as the geography of the battle and the disposition and tactics of the troops. What sticks with me most is the desolation of the place. We were there in the first week of May and it was bitterly cold, with snow on the peaks in the distance and a freezing wind howling across the open moor. The battle itself took place mid-April so it’s possible that the weather was similar. Certainly contemporary accounts are that the battle took place in rainy and windy conditions.

The memorial cairn at Culloden Field 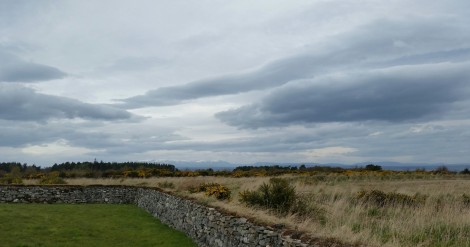 The open field of Culloden

Cumberland’s soldiers had orders that ‘no quarter should be given’ – a euphemism for ‘kill as many as you possibly can’. And so men fleeing the field were chased and cut down; villages in the surrounding countryside were burned, their women raped and children brutalised. As for Charles… he spent five months on the run before escaping Scotland with the help of a network of Jacobites that included Flora Macdonald, finally sailing for France on 20th September. No longer The Young Pretender, the ‘Bonnie Prince Charlie’…he died in Rome, alone, drunken and bitter, in 1788. His legacy was the beginning of the destruction of the Highland way of life and the Gaelic culture…oh, and the Skye Boat Song.

Statue of Flora Macdonald in Inverness