What’s the collective noun for a group of Druids? You may not think this is a very important question but this week it has been uppermost on my mind (after pondering on what we’re going to have for dinner, which is almost always my number one priority). I’ve read a suggestion somewhere that it should be a ‘Stonehenge of Druids’, though personally I’d go with a ‘Stone Circle’. Or, having seen them in action over the last few days, a ‘Shuffle of Druids’ seems appropriate.

Maybe I’m unusual here but I don’t spend a lot of time thinking about the wardrobes of Druids. If I come across a mention of them in a book or film it’s usually a fictional piece anyway, and historical detail is scant. They’re portrayed as a group of ancient pagans who worshipped trees and indulged in ritual sacrifices, and what covered their toes doesn’t get a mention. I suppose they would have worn whatever was around at the time – leather sandals, maybe. Or boots so that the blood didn’t splash their feet.

Now though, I can tell you that this week I have been a witness to what today’s Druids choose when they visit their local shoe-shops. Brace yourselves, everyone: because the modern day member of this curious sect is as individual as anyone else. Brightly coloured sandals, walking boots, sparkly golden court shoes, trainers, and rubber flip-flops designed for the beach.

My Druids weren’t on a mountain-top or in a remote woodland glade, they were to be found at Abergavenny, a handful of miles along the road from us, at the National Eisteddfod. If you’re outside Wales, it’s possible you haven’t heard of this annual festival to celebrate music, literature and the arts. It may help to know that the Welsh people have always been particularly fond of the sound of their own voices (I mean it in the nicest possible way) and naturally talented with words and music. This was noted by the medieval churchman Geraldus Cambrensis in his ‘Description of Wales’, written in 1194:

In their rhymed songs and set speeches they are so subtle and ingenious that they produce, in their native tongue, ornaments of wonderful and exquisite invention both in the words and sentences. Hence arise those poets whom they call Bards, of whom you will find many in this nation, endowed with the above faculty

So cultural excellence has always been highly valued in Wales, from as far back as it’s possible to find records – by the common man but also by medieval Welsh princes and nobility – so it was probably inevitable that something like the Eisteddfod would evolve. The first of these gatherings that we have definite knowledge of was called by the Lord Rhys in 1176, when he invited poets and musicians to Cardigan Castle to compete for the prize of a chair (a huge status status symbol in medieval times).

The tradition continued over the centuries, though not in such an organized way. It wasn’t until the end of the 18th century that Iolo Morganwg founded the ‘Gorsedd of the Bards of the Isle of Britain’ and the first modern Eisteddfod was held – weirdly in Primrose Hill, London. It took a little while for everybody to get their acts together but by 1860 there was a National Eisteddfod Council which, along with the Gorsedd, initiated the annual Eisteddfod.

Every child growing up in Wales comes into contact with the Eisteddfod structure, because there are school versions, local versions and youth versions.  I can still remember the relentless nature of the beast. There was no choice, no possibility of not taking part in the competition. And competition it is – no watered down events such as today’s school sports days, where politically correct rules make it impossible for one child to win over the others. The Eisteddfod has teeth. I think it’s safe to say that nothing like it exists anywhere else in the world, and so when the organizers of the big beast issued an invitation to people to help at this year’s jamboree I jumped at the chance.

I spent the first week with a group of a dozen or so others stationed at the main entrance to what was, at that point, a building site. Our main role was to escort people on and off site – at that point every ‘tent’ and building was white and anonymous. By the Friday we were also controlling traffic coming into the adjacent car park. The best thing about these few days was that I got to practise my fledgling Welsh language skills, which was one of the reasons I’d volunteered in the first place. 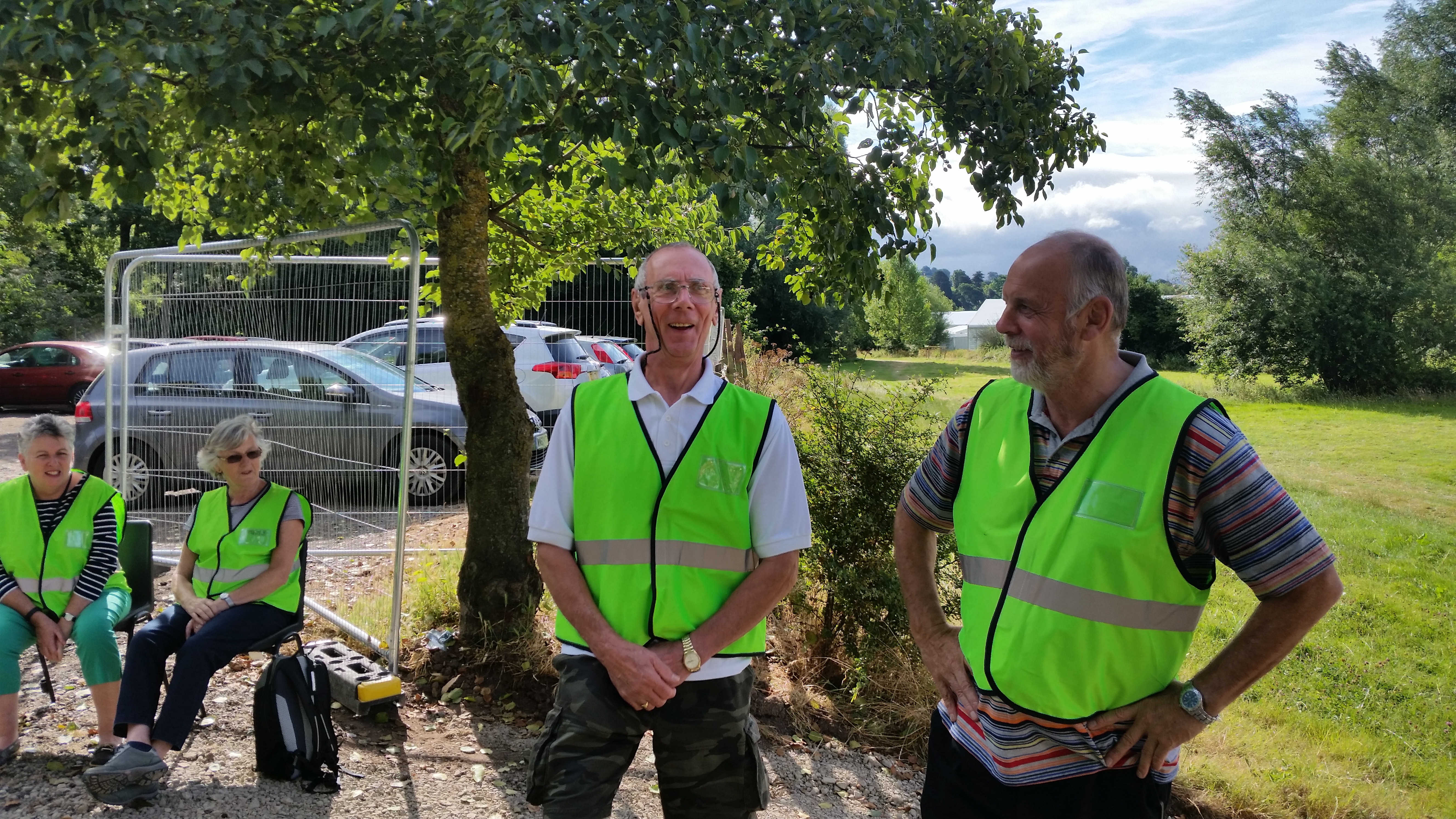 My fellow stewards were a thoroughly nice bunch of people and with the exception of myself and two others, all spoke the language fluently. They were encouraging, funny and kind and I had a great time with them. Thanks to them I gained enough confidence to open my mouth and actually speak to complete strangers in Welsh.

The Eisteddfod opened with a concert on the Friday evening and things really got started on Saturday. As well as poetry, literature, art and drama all over the Maes (Welsh for field, the name the site is known by), you couldn’t move without hearing music and song – solos, choirs, small groups, and folk bands. Back to Geraldus again for another observation on the people of 12th century Wales:

In their musical concerts they do not sing in unison like the inhabitants of other countries, but in many different parts; so that in a company of singers, which one very frequently meets with in Wales, you will hear as many different parts and voices as there are performers, who all at length unite, with organic melody in one consonance and soft sweetness…

The Maes, early in the day – before the crowds

Monday saw the first appearance of the Druid horde – or the Gorsedd as I really should call them.The word gorsedd  means throne – in Welsh the prefix gor represents an overdoing of something and sedd  means seat – so an overblown seat becomes a throne, get it? Anyhow on the Monday the Gorsedd (they of the fancy footwear) oversee the Crowning of the Bard (for best poem in free verse), they award the Prose Medal on Wednesday, and on Friday it’s the culmination of the lot, the Chairing of the Bard (best poem in strict metre, a very traditional, rigorous form called cynghanedd). The Chair isn’t always awarded – if the judges feel that no-one has reached the exalted standard required, they say so and the entrants are dismissed.

As well as this, on Friday morning there is a procession to the stone circle (especially erected for the event, which will remain as a marker afterwards) and new members are formally inducted into the Gorsedd. I say formally – what else would you call an event which involves a long line of swaying folk clad in ceremonial costume, preceded by an enormous banner, two dozen flower girls, trumpeters, a Grand Sword Bearer and – wait for it – the Archdruid.

Delightfully, when I turned up at the stewarding office that morning, I was told I would be one of the hapless team who had to try to shepherd this collection of souls into some semblance of order. The walk to the stones was fine, everyone knew where they were going and they were focused. The ceremony went without a hitch; there was trumpet blowing and a dance by the flower girls followed by presentation of flowers to the Archdruid by Morwyn y Fro (maid of the area), presentation of the Horn of Plenty by Mam y Fro (mother of the area) and then the new Bards were formally introduced. Finally the Grand Sword was partially unsheathed (never completely, that would be a hostile gesture and this is all about peace) and the Archdruid called out to everyone:

After each ‘A oes heddwch?’  the crowd responds ‘Heddwch!’, meaning ‘there is peace’ and the sword is resheathed.

This was all very interesting and colourful, there were plenty of television cameras and so on. Then came the moment when we had to make the return journey to the Ystafell Ymgynyll (Assembly Room) and this is when things started to fall apart. Someone – I don’t know who – decided to take a different route and so we all blithely followed, scattering the crowds as we went. It’s interesting to see how much chaos can be caused over the distance of no more than four hundred yards or so, by  a group of people who have…switched off, shall we say? Having performed their ritualistic duties (no blood spilled, I promise), the Druids saw the occasion as an opportunity for a chat. With each other, with people they recognised in the crowd along the path, with complete strangers, with members of the BBC, S4C, ITV, national press. In the end we gave up trying to retain any semblance of order and just let them get on with it, reckoning that nobody on that field could point a Druid where he/she didn’t want to go.

And so, the National Eisteddfod came and went. The weather was kind once Monday’s heavy downpours had finished and the mud had dried up. There was lovely music and inspiring poetry from young and old – including a wonderful 99 year old woman from Brecon who has competed every year of her life since she was old enough to recite a rhyme. There was also plenty of food and drink (including delights such as strawberries, marshmallows and chocolate), as well as opportunity to spend hard earned cash at assorted stalls. Think country show with music instead of farm animals and you’re halfway there. 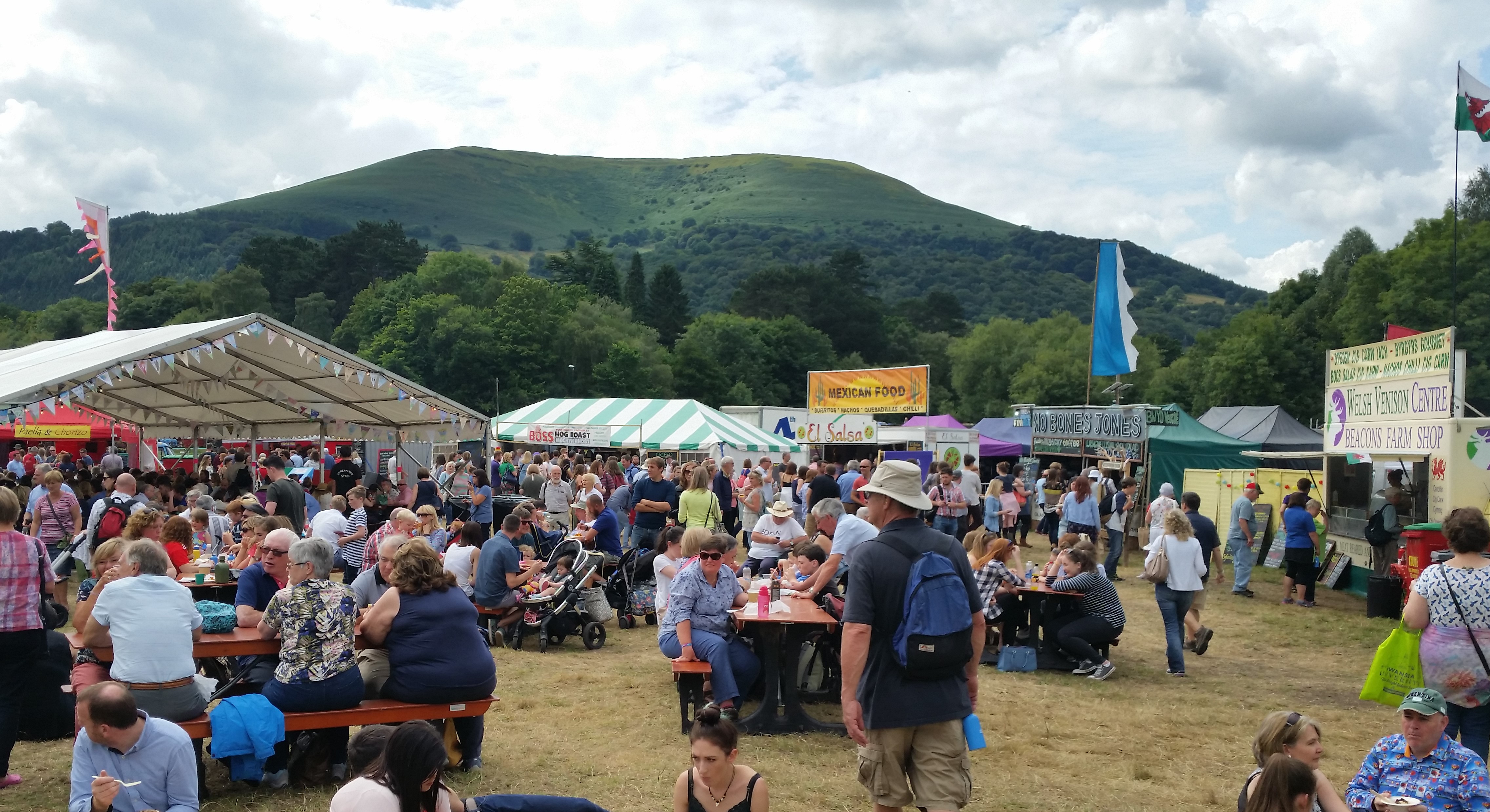 By the time the fortnight ended I’m not afraid to say I was completely pooped and glad to put up my aching feet – to the great amusement of the friendly lady in the stewarding office, who spoke English to me only as a last resort. We reached this point at Friday lunchtime, when instead of using the word feet (traed) I told her my beach (traeth) was aching.

A mistake anyone can make.

3 responses to “Walking with druids”