There was a fire in the wide hearth before them, and it was burning with a sweet smell, as if it were built of apple-wood

I’m sure you’ve all heard the myth that the Inuit have over thirty words for snow. Sadly it’s a fabrication…but I have good news! There are at least two words in the Welsh language to describe specific types of snowfall. One of these is manod meaning fine snow (I have no idea why, except that mân means tiny or minute), and the other is cynneiry, which means first snow. Cynntaf means first and eira means snow, so you can sort of see where this one comes from. There may well be other snow-words but, believe it or not, I have a life so I’m not about to go searching for them; if they want to be found they will be.

Unfortunately neither of these terms is now in common use but are actually found in medieval Welsh. Cynneiry appears in the Mabinogion, the earliest written versions of which date back to the 14th century. Both cynneiry and manod are to be found in my Great Welsh Dictionary though, which is a quite weird and wonderful book. A random check shows that of the 55 entries on one page, 28 are marked as being obsolete. A lot of them are to do with battles, warriors, courtly behaviour and so on, as well as ancient farming/riding equipment or weaponry. I mean, where would we be without our paladrddar (oak spear), our talgellog (cupbearer) or our seinedydd (keeper of the signet)?

One word which hails from those far off times and is still in use is aelwyd, and as it’s central to this post I think it’s worth a bit of pronunciation coaching. Ael rhymes with ale as in gale…that’s the easy bit. The second syllable is a bit trickier; wyd  requires you to make a sound like the oo in good (or ou in could, take your pick) and then stick eed as in weed onto the end. Put them together and what have you got? No, not bibbidy-bobbidy-boo…

What you’ve actually got is one of my favourite words, partly because of the sound but also because of the meaning. According to the dictionary there are two definitions: hearth and home, but actually it’s a kind of mix of both. It’s not too much of a stretch to define aelwyd as the beating heart of the household. To understand its importance you need to consider the origins of  the word, and the way of life which gave birth to it, because fire has always been hugely important to mankind. The Welsh Medieval Laws credited to the 10th century king Hywel Dda (Hywel the Good) mention fire dozens of times, covering the penalties for burning down a property by intent or by negligence, the position around the fireplace that members of the court would occupy, and also the duties of the fire-kindler. The fire was never allowed to go out, and even in Welsh homes of later centuries a glowing ember was always left in place at night, covered in ashes. This would become the ‘seed of the fire’ for the following day.

A fire burning in the hearth gave legal status too – the owner of the fire owned the house. In the time of Hywel Dda, a man who had been dispossessed of his ancestral home could reclaim it by lighting a fire in the hearth – as long as there was no other claimant. Things became a little more complicated then, as you can imagine. This practice may have led to the later phenomenon of the Tŷ Unnos, or the one-night house. It’s uncertain as to when they first emerged but they seem to have become more common in the 17th century, probably as a response of the cripplingly poor to the Enclosures Acts. The idea was that a man could erect a buiding overnight on common land; if by the following morning the roof was on and smoke could be seen rising from the hole in the roof that served as a chimney, the builder could claim legal ownership of the house and all of the land around it within an axe-throw.

Interestingly enough I met a woman last year who told me that the farm-house she lived in a few miles from me had begun life as a Tŷ Unnos, and no doubt there are plenty of others about. The well known Tŷ Hyll (Ugly House) outside Bettws-y-coed in North Wales was allegedly built in 1475 – at least according to the date carved above the hearth. 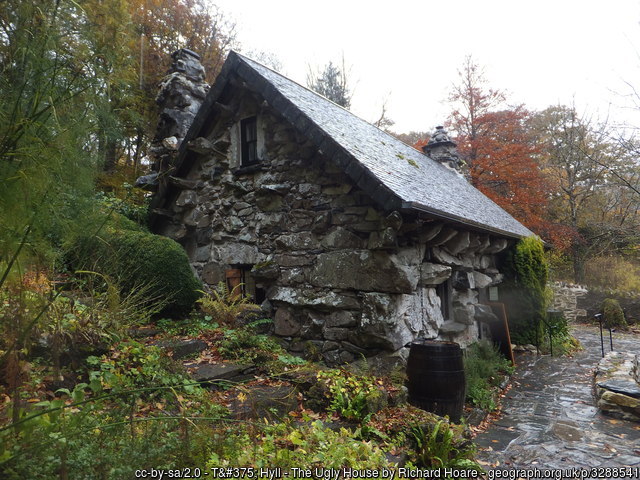 The aelwyd, with its fire burning brightly at all times, has always been a place of warmth, light and comfort. It was a place to cook and to sit together, even in the simplest of homes, and became central to family life and community. Groups of neighbours would get together in one house and these parties were of fundamental importance not only to the social welfare of the people but also to their economies. Once summer and the harvest was over, activities in the home changed. The autumn equinox was the marker for the onset of winter routines, and once it had passed, noson weu  began…knitting evenings. Amidst a backdrop of story telling, riddles or song, men would make kitchen untensils, brooms or baskets and the women would knit. All of this home industry made an impact on the family fortune – one report from early 19th century Ceredigion tells us that a woman could produce four pairs of knitted stockings a week, which made a profit of 3 pence a pair when sold at Tregaron market…

Talking of winter routines, we’ve reached the time of year when the Christmas frenzy begins to take hold. One aspect of this is the annual switching on of town lights, which seems to have become a really big deal. Such was the case last week in Brecon, and we went along to enjoy the atmosphere (and to seize the opportunity of grabbing a Chinese takeaway). Brecon had scored a bit of a coup, as they’d managed to get Joanna Lumley to come along and do the ceremonial button pressing. Gracious as ever, she sat on the makeshift stage watching Nepalese dancing, and presenting prizes to winners of decorated shop-windows and Christmas card designs. Joanna has a long association with the Gurkhas of course, and as there’s a Company of Gurkhas based in Brecon, that’s probably why some bright spark in Brecon had thought to invite her – and no doubt also explains why she agreed.

I was persuaded by all this seasonal fun to start my Christmas shopping a bit earlier than usual, but I’m glad to say I resisted the anti-social madness that is Black Friday. There are enough local shops and Christmas Fairs to satisfy my needs – and it’s a lot more fun. Crickhowell’s own Christmas Fair is on Thursday 7th December, and I’m looking forward to filling my non-plastic, reusable bags with plenty of goodies.

Until then I’m going to enjoy some noson weu  of my own with a few good friends – not around a hearth but in a local pub! The cynneiry has been and gone, but I’m looking forward to the second snow; hopefully it’ll hang around a bit longer…

“Surely everyone is aware of the divine pleasures which attend a wintry fireside; candles at four o’clock, warm hearthrugs, tea, a fair tea-maker, shutters closed, curtains flowing in ample draperies to the floor, whilst the wind and rain are raging audibly without.”

4 responses to “Home is where the hearth is”

Follow at home in the hills on WordPress.com
All opinions my own. All words and images are copyright of athomeinthehills unless stated otherwise. You may not copy or otherwise reproduce any of my material without prior written permission.
Loading Comments...
Comment
×