‘The lands in this parish are chiefly arable, and in many parts wet and weepy’

Theophilus Jones, A History of the County of Brecknockshire 1809

A woodcut of the Great Severn Flood, January 1607

“Lamentable newes out of Monmouthshire in Wales: The wonderful and most fearefull accidents of the great ouerflowing of waters in the saide Countye drowning infinite numbers of Cattell of all kinds, as Sheepe, Oxen Kine and horses with others: together with the losse of many men, women and children and the subversion of xxvi parishes in January last 1607.”

Don’t panic! We haven’t suffered a catastrophe and I haven’t lost my ability to spell, though you’ll no doubt have noticed that my punctuation is sometimes a little dodgy. The paragraph above is an example of a story that appeared in news pamphlets just over 400 years ago when a torrent of sea water swept inland at heights of up to eight feet. The flood wasn’t confined to Monmouthshire but wrought havoc throughout the Bristol Channel, from Carmarthenshire on the Welsh side and from Devon on the English, right up into the Severn Estuary. There’s a significant tidal range in the channel and all the rivers emptying into it would normally experience a backsurge at incoming tide. On this occasion things were far from normal and over 200 square miles of land were submerged by the rolling waters.

In all over 2,000 people lost their lives, along with untold numbers of livestock. Sea walls were swept away, as were homes and farms, churches and bridges. The current theory is that the devastation was due to a tsunami, the result of an earthquake deep in the waters of the Irish Sea. There was a re-run of a TV programme about this about a fortnight ago and I was soon convinced. Especially when, last Saturday, we experienced an earthquake of our own…

As far as I know there were no casualties or damaged buildings, though predictably there were plenty of jokes doing the rounds on social media. The epicentre was about 40 road miles from here, in Cwmllynfell just outside Swansea. I don’t mean to be rude but that’s probably the one and only time Cwmllynfell will ever feature in the national news – its Wikipedia entry (it really has one) was updated within a day to include the earth-shattering event.

This is so far outside normal for this part of the world that it’s not surprising that it’s attracted so much attention. Much more likely to feature in these Black Mountains is heavy rain or occasional snow, though we don’t often get so much of either that it causes disruption. The heavy snowfall we had back in December soon cleared and it was as though it had never been. All memory of it was washed away by some determined rainfall. This had several effects: the first was that we didn’t go out very much. Yes, I know that life is short and we should just, as Billy Connolly famously said, get a raincoat…but it’s somehow more comforting and comfortable to be curled up on a sofa with a great mug of tea and a plate of chocolate hobnobs. As well as not going out we ended up with washing draped across radiators because (despite what the man who thinks he’s in charge says) there is an awful lot of clothing that should not and WILL NOT see the inside of a tumble dryer.

It also means that even days after the skies have cleared, the streams and rivers are full to the brim. This is most obvious when walking in the dark because then, of course, you can hear the sound of rushing or tumbling water, and it’s surprising how loud it can be. As it gets dark late afternoon we seem to be in unlit woods or fields fairly frequently – even a trip back from the local shop or pub (especially the pub) can be fraught with hidden hazards. I feel as though I’m bonding with the local wildlife sometimes…darkness is so much more than the absence of light, to coin a phrase. It’s also the absence of warmth and security, and an increased awareness of the dangers of the natural world; it’s a sort of default, or factory reset. If you’re a town dweller, take a trip some time into the countryside. In the dark. Grab a torch and walk some distance from cars, roads and houses; then switch off your torch and stand there quietly for a few minutes. I’m sure you’ll understand what I mean – you’ll also be able to see the stars, if it’s a clear night.

A fortnight ago the Nant Onneu (the brook which runs through our village and once supported not one but two mills) was twice its usual width, while the Usk river was at one point six feet above its usual height. The Usk has a bit of a reputation for misbehaving, although it hasn’t flooded now for several years – certainly not in the last four, while we’ve been living here – but at times like this the water looks dirty and dangerous. It’s hard to remember that in the summer it’s clear and gentle – and important to know that even six inches of fast flowing river water can knock a grown adult off their feet.

The Usk river looking mean and moody two weeks ago

Thankfully tragedies are few and far between and probably the worst on record happened in 1753 at Llanfeugan, a village about 4 miles south east of Brecon. A party set out from the eastern side of the River Usk to celebrate a wedding. They never made it  and amongst the dead were the bride & groom. I don’t know, but it’s probable that they tried to cross the river at the Skethrog Ford…after all, a ford is a sensible place to try to get to the other side, isnt’t it? But look at this, from local newspaper The Courier on Thursday, 1st July 1817:

‘MELANCHOLY ACCIDENT. On Thusrday se’nnight, as the Rev. David Evans, of Llanvigan, Breconshire, with his eldest daughter Miss Caroline Evans, a fine young lady about twenty years of age, were crossing the river Usk at Skethrog Ford, on their way to dine with Sir Edward Hamilton, the horse on which they rode, getting his feet entangled in the concealed root of a tree, by which the animal was thrown down, precipitated them into a deep part of the river, and Miss Evans sunk to rise no more. Her father saved himself with great difficulty by clinging to the horse’s tail, the animal dragging him ashore. The young lady, by the exertions of a shepherd in the employ of Mr Bail, was got out shortly afterwards, but not til the vital spark was extinct. Immediately after the body was brought on shore, the father being on the opposite side of the river, expressed the utmost anxiety to cross, and the poor shepherd kindly stripped, and endeavoured to cross the stream again, for the purpose of bringing him over, when on reaching the spot where he had just before taken up the dead body of Moss Evans, melancholy to relate the poor fellow sunk and also perished, leaving a wife and child to lament his loss.’

Fords were always a problem, whether for marching armies, livestock drovers or simply normal folk going about their everyday lives. Bridges are a much better bet. They’re also often impressive or beautiful  – or both.

The bridge at Crickhowell is a symbol of the town; there are innumerable pictures of it, and I’ve probably taken dozens myself! At one time it was wooden but as Theophilus Jones tells us in his History: “In October 1703, it was ordered that all public bridges on common roads be in future repaired by the inhabitants of the whole county…Crickhowell bridge, then ruinous, was ordered to be rebuilt with stone piers and arches for £400 at the expense of the county”. He later says: “…Crickhowell bridge was widened and repaired in 1809 at a cost, including assumed maintenance for seven years, of £2,300, the work being undertaken by Mr Benjamin James of Llangattock. The bridge had been destroyed by a great flood the previous winter, and a temporary bridge erected.” 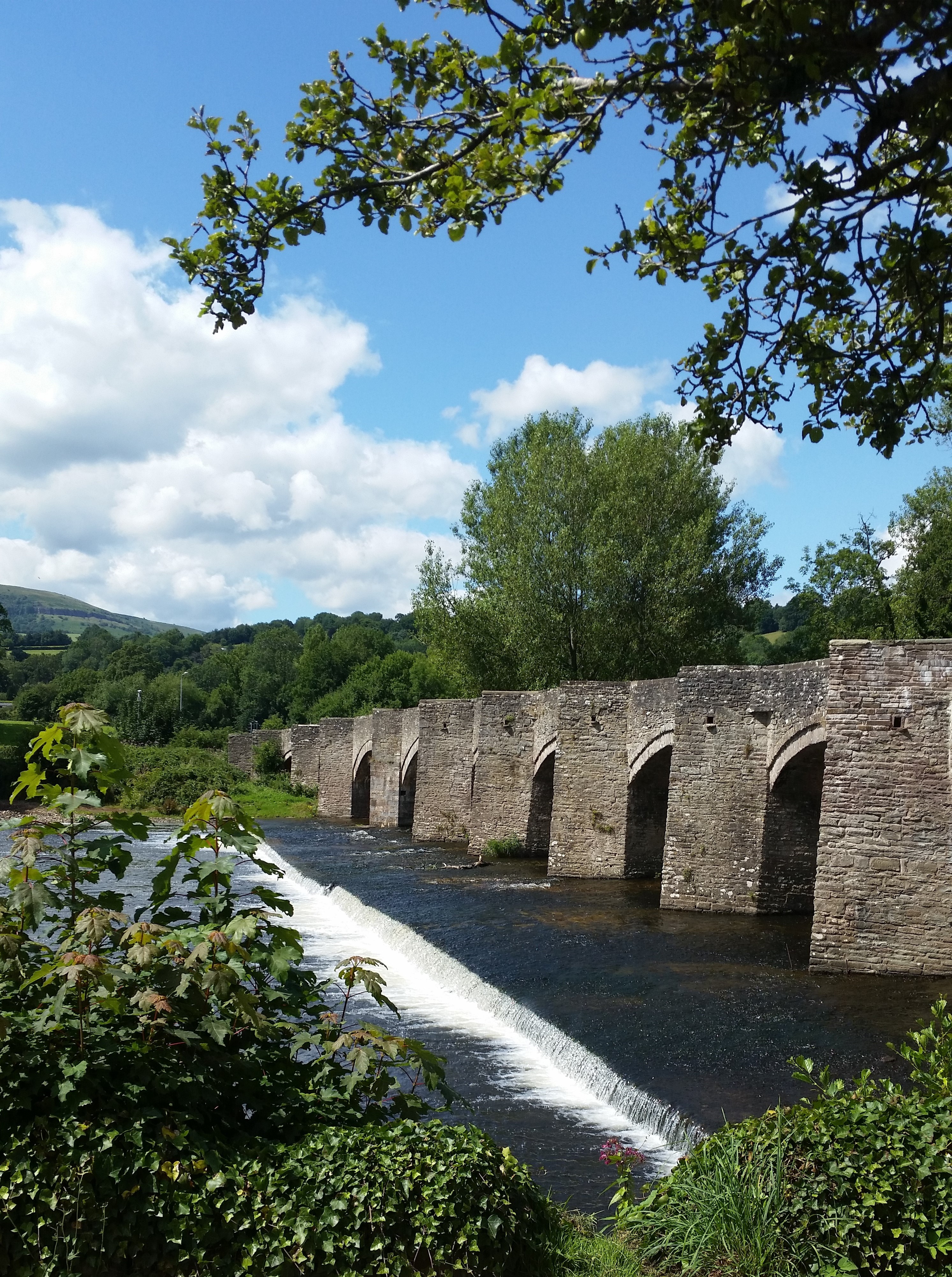 The summer version of the Usk at Crickhowell bridge

We can but hope that Crickhowell’s bridge and others remain in good repair far into the future. A recent survey found that many of our ancient stone bridges are suffering significant damage because they weren’t built to cope with the heavy traffic that’s using them today. A high cost for the County Councils that will probably be stuck with the bill but needs must. Quite apart from the genuine anguish I and many others would feel if the old fabric crumbled, it would be inconvenient to say the least, as it was for the townsfolk of Tadcaster, Yorkshire when they lost their bridge to floods in December 2015.

Maybe we should get some fisherman’s waders just in case…

Water is the driving force of all nature